Well above average temperatures sprawled across Eastern Canada this past week. Temperatures crept into the low-to-mid 30’s from the great lakes region to the Northern Atlantic. While Eastern Canada enjoyed their first heat wave of the season, cooler than temperatures were prevailing further west. However, those cooler temperatures out west are likely a thing of the past by this upcoming weekend.

All of this has me thinking about anthracnose. We have already observed anthracnose activity in parts of Ontario and Quebec. Additionally, reports of anthracnose development have been reported out in the prairies and further west. This is the time of year where we are doing our best to maintain the best possible putting surface we have. As temperatures warm, and the plant’s recuperative ability slows, it is paramount to shield off opportunistic pathogens. Scouting for a disease such as anthracnose is critical in providing a healthy putting surface for the rest of the summer season.

Anthracnose, caused by the pathogen Colletotrichum cereale, can be a severe disease of intensely managed putting green surfaces. Although anthracnose is more common on annual bluegrass, the causal agent can also incite disease on older cultivars of creeping bentgrass. Additionally, anthracnose can also be an opportunistic disease of highly trafficked approaches and tees during peak summer stress.

Early scouting for the progression of anthracnose symptoms is critical. Curative control is more easily achieved during the initial stages of disease development compared to alleviating a severe infection.

What to do look for:

Before we discuss the signs and symptoms on a plant level, it is important to look closely at your own cultural management program. What is your mid-summer mowing height? What are your fertilization inputs? Is your topdressing rate and frequency matching your rate of growth? These are all important considerations to evaluate before we make a decision on a fungicide treatment. Fortunately, best management practices for anthracnose have been developed by scientists at Rutgers University. The link to that information is provided here.

Symptoms of anthracnose tend to differ based on host species. On low mown annual bluegrass, initial symptoms include the yellowing of leaf tissue and a loss of shoot density. However, yellowing of the leaf tissue is less commonly observed on creeping bentgrass. The base of the plant, near the crown, may also appear rotted and water soaked. It is not uncommon to see anthracnose develop into patterns such as streaks. This is most commonly observed on clean up mowing patterns on the perimeter of putting green surfaces.

On older varieties of creeping bentgrass, initial symptoms develop as a bronzing of the affected leaf tissue. As such, it is often more difficult to diagnose anthracnose on creeping bentgrass during the initial stages of disease development. Interestingly, it is not very common to see advanced stages of infection on both creeping bentgrass and annual bluegrass on the same putting surface. Unfortunately, both grasses can suffer considerable injury and even death if left untreated.

The signs of Colletotrichum cereale can be readily viewed with the aid of a hand lens and serve as a useful diagnostic trait. The pathogen produces darkly pigmented fruiting structures called acervuli that protrude from affected plant tissue. The outside of this fruiting structure may be covered in small blackened spines called setae. The inside of the acervuli houses numerous banana shaped spores called conidia. It is these conidia that can be transported from plant to plant and spread the infection. 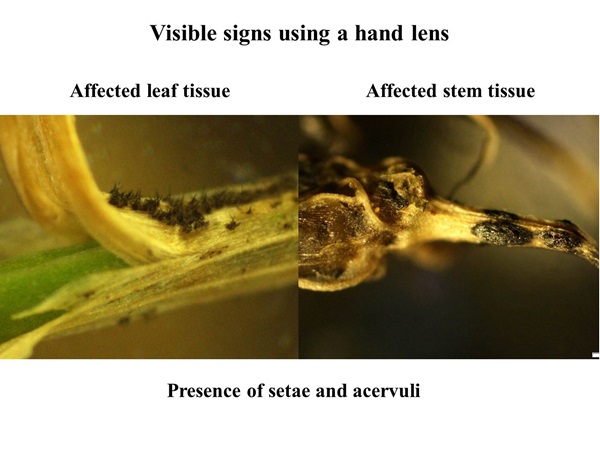 Those with a prior history of anthracnose should be on a preventative fungicide program. This is the time of year many folks should be anchoring their fungicide programs with Signature XTRA Stressgard. This product is labelled for control of not only anthracnose, but also Pythium root rot. As such, this material is able to provide protection across the entire matrix of the plant due to its systemic movement in both the xylem and phloem tissue.

It is important to understand that there is no single product that can provide complete control of anthracnose all season long. Since a silver bullet does not exist, it is important to tank-mix other modes of action into the spray solution.

Mirage Stressgard is a DMI fungicide that has demonstrated effective anthracnose control when tank-mixed with Signature XTRA Stressgard. This DMI fungicide causes less growth regulation compared to other fungicides within the DMI class. Additionally, Mirage Stressgard contributes to the control of other diseases such as dollar spot and brown patch. Alternating this tank-mix combination with a Signature XTRA Stressgard + contact fungicide (such as chlorothalonil) is an effective strategy for anthracnose control.

It is equally important to consider both cultural and chemical programs into your integrated anthracnose management program. Furthermore, it is critical to ensure an accurate diagnosis to determine the most effective action plan. When using fungicides, always read and follow the label instructions to maximize their effectiveness.