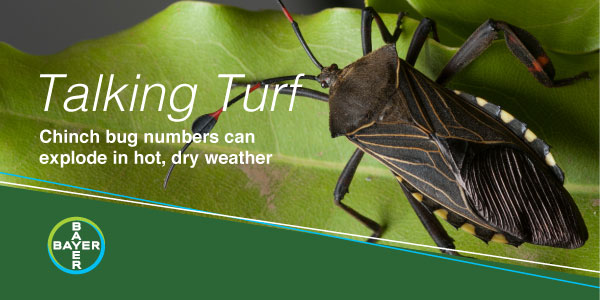 Chinch bug was first identified in Ontario in 1971. Since then, the population of this destructive pest has been steadily increasing across Eastern Canada. Although chinch bugs are increasingly prevalent, golf course superintendents and homeowners don’t always attribute the brown, irregularly shaped, sunken patches to chinch bug damage.

In recent years, especially hot, dry summers, chinch bug has muscled Japanese beetles, European chafers, and all other scarab beetles to the side as the number one pest in lawn and turf.

Chinch bugs (Blissus species) are very small insects that overwinter in the turfgrass thatch, leaf litter or other protected sites and can feed on most cool-season turfgrasses. They use their piercing mouth parts to suck the sap from the crown and stems of turfgrass plants.

As temperatures warm in the spring, the adults will mate and lay eggs in the turfgrass thatch or directly into the leaf sheaths of the turfgrass plant. When temperatures are below 20°C, it may take 20-30 days for the eggs to hatch. However, if daytime temperatures consistently exceed 25°C these eggs can hatch in just one week.

Early instar nymphs go through several stages before reaching adulthood. However, every stage of the nymph can damage plants through their piercing-sucking mouthparts. During feeding, nymphs and adults secrete a solution into the turfgrass plant that clogs the vascular tissues. This causes further stress as the secretion helps block the transport of water.

The average female adult chinch bug can lay up to 200 eggs. This results in skyrocketing populations of adults and nymphs during hot and dry weather in early summer. Nymphs can feed on turf for up to 6 weeks before seeking an overwintering site or reproducing a second generation. As few as 80 chinch bugs per square meter can cause visible damage in residential lawns.

Populations build within the rough and green surrounds – areas that aren’t mowed as closely or regularly treated with insecticides – until they migrate to other turf. There can be a daily migration of thousands of chinch bug adults and nymphs moving from nontreated areas into treated areas. Once the concentration of the insecticide wears off, these migrating chinch bugs can move into the treated area and begin to cause further damage and decline.

Use growing degree days to gauge when to scout

Scout chinch bugs when they reach the 1st instar nymphs stage. The timing of this development stage depends on the number of growing degree days.

Use a common base temperature of 7°C:

The best way to identify chinch bug is the modified flush method. Cut the bottom out of a coffee can and push it 2 inches into the ground. Fill the can with water and keep it filled for 30 seconds. Watch to see what floats to the surface.

Chinch bug nymphs are small and bright red in colour when they first hatch. They darken as they mature until they turn grey/brown in colour. Immature nymphs have a white band across their abdomen which is covered by the wings as the insect matures.

You can help your turf battle chinch bugs by keeping it healthy and irrigated and by overseeding resistant cultivars:

TETRINO™ is a broad-spectrum systemic insecticide that has strong activity across many root- and surface-feeding insects. Tetrino should be applied as a foliar spray to control surface-feeding insects such as chinch bugs in a sufficient water volume to provide coverage to the base of the plant. Applications of Tetrino should be made when small nymphs are observed in the thatch layer or are found feeding on leaves and stems. As a systemic insecticide, Tetrino works best when the plant is actively growing.

DELTAGARD® SC is a broad-spectrum contact insecticide that is effective against chinch bugs and several other surface-feeding insects. Similar to Tetrino, DeltaGard should be applied in a sufficient water volume to achieve coverage deeper into the turfgrass canopy. DeltaGard is an excellent choice in severely compromised lawns when the turfgrass is entering summer-induced dormancy.

In a hot, dry summer it’s not uncommon to see 600+ chinch bugs or more per square meter. This means it can be challenging to eliminate all visible damage, even when you are reducing the populations by 90% or more through chemical treatment.